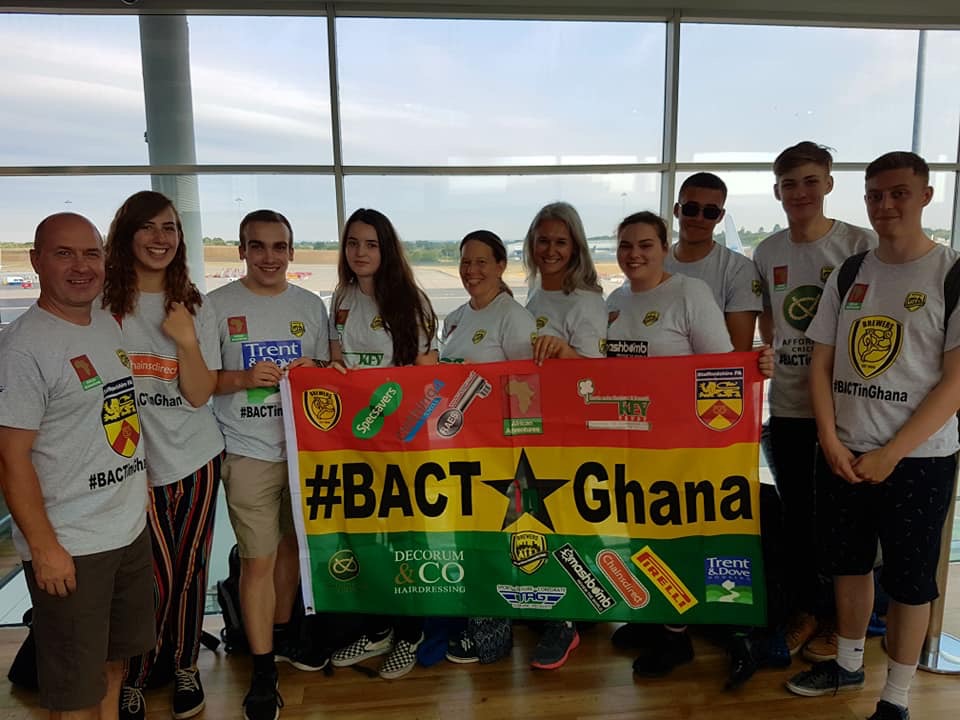 Our very own Sam has been on a bit of an adventure. So, we thought it only right that she should tell us all about it. Take it away Sam!

I Went to Ghana, Let Me Tell You About It…

At the end of July, I headed out to the south coast of Ghana, Africa, where I had the experience of a lifetime.

For the last ten months I have been raising funds to send myself on a volunteer trip to a small village in Ghana, Woe. I was sponsored by Smashbomb, which helped me reach my goal of £2500. So on July 27th, myself and ten other volunteers from our local football community trust, jumped on a plane in Birmingham, England, to head to Amsterdam and then from there we got onto a six hour flight to Accra, Ghana.

African airports are very different to anywhere I had ever traveled to – there is seemingly no real organisation with security you wouldn’t even joke about messing with! That night we traveled to our accommodation in Accra, the last place we were able to find wi-fi for almost ten days. On July 28th, we started our travel to Woe, Volta Region, on the south coast. I don’t think I could ever forget the bus ride down to Woe, it was like there were no rules on the road, and cars, trucks and bikes could do as they pleased. People used their car horns to tell people where they were going – it was crazy! Four hours on a bus with ten people and no air-con was an interesting experience but because it was a school bus, we were at least able to spread out… We arrived in Woe at lunch time, the hottest part of the day. The volunteer house had fans in each room, which was perfect (until the power went out). Lunches were rice with either red-red (a local bean dish), a tomato sauce or chicken, which is what we wanted after the long trip from the capital.

We had the weekend to get acclimatised to our new environment, which gave us time to explore the community. A few other volunteers and myself, walked to the beach. We were shown the way by the local children, who were very excited to see us in country. What We Did At The school!

Tegbi EP Basic School, was in the next village over from Woe, and held more than 900 students. The school is spilt up into Lower School and Junior High School. In the lower school, each class held around 45 – 75 children of mixed ages. The way the classes work is from class 1 to 6, and the children can only go onto the next class if they have passed the exams in the class before. So some of the children I was teaching were 6 or 7 years older than the children that were meant to be in that class.

I taught from class 1 to 4, and mainly taught english and science. For english I taught the children about rhymes and tenses and for science I showed the experiment with Coca-Cola and Mentos, which shows the release of CO2 in the form of a small explosion of Coke. The children loved this, since they are normally unable to do science experiments due to a lack of resources. Whilst I was teaching with a few other volunteers, the remainder of the group were set the task of building a library in an existing room. The room needed some structural work as well, a new roof and fixing parts of the wall. They also needed to level out the floor and paint the inside and outside of the room. Some of the group even made two new steps outside of the library and the pre-school classroom. At the school I found that there were two children in class – 1 that had shoes with no soles, meaning that if they were to tread in something, they would’t be protected. On the last day I talked to Eric, a teacher at the school, about giving the girls some new shoes that I had. He arranged for me to give the girls the shoes without the other children being around.  Emanuella and her friend were happy to receive a new pair of shoes and to not have to walk around in basically nothing. Before we left the school on the last day, the other teaching volunteers and myself wanted to make sure that all the children in the classes were able to learn without the issue of not having stationary, so we gave each child either a pencil or pen. The Other Things I Did in Ghana…

Of course the main reason for going to Africa was to teach in the school, but we also got the chance to take part in other activities. In the evenings we had lessons on Ghanaian marriage (traditional and modern), drumming and we went on walks to the lagoon and the beach. We had an evening at the market, which was interesting. The smells and the amount of people were overwhelming, although eye-opening. Its weird to think that we do our weekly food shop at the supermarket but in Africa people go to the market if they need something. For the last weekend, we had R&R for the night. We traveled to Keta on the Saturday afternoon and stayed at the lagoon for that night. Let me just say that in Africa that accommodation would have been a 4 star but for me it was more of a 2 star and thats just because of the view. The lagoon is the most beautiful body of water I have ever seen. Its not overly dirty and has small islands in the middle. Sunset on the lagoon has to be the best I’ve ever seen. We had dinner at the local restaurant which served western foods like burgers, so we were all a bunch of happy bunnies. On the last night, we sat by a bonfire and talked about our favourite parts of the trip and mine had to be doing the experiments with the children and giving the teachers something new to do, and also meeting new people and making new friends. Now That I’m Back In England…

I really miss Africa, it was all so amazing and something I could never forget. I made new friends over there and had so many experiences that I would have never had in England, plus I really miss the hot temperatures. England (even in a heatwave) feels so much colder. I would recommend this trip to anyone that wants to do some good and wants a holiday with a twist. I am very happy to be back with my family and my dogs though. I want to say a big thanks to Dave (Smashbomb) for sponsoring me for this trip, and for supporting me throughout.