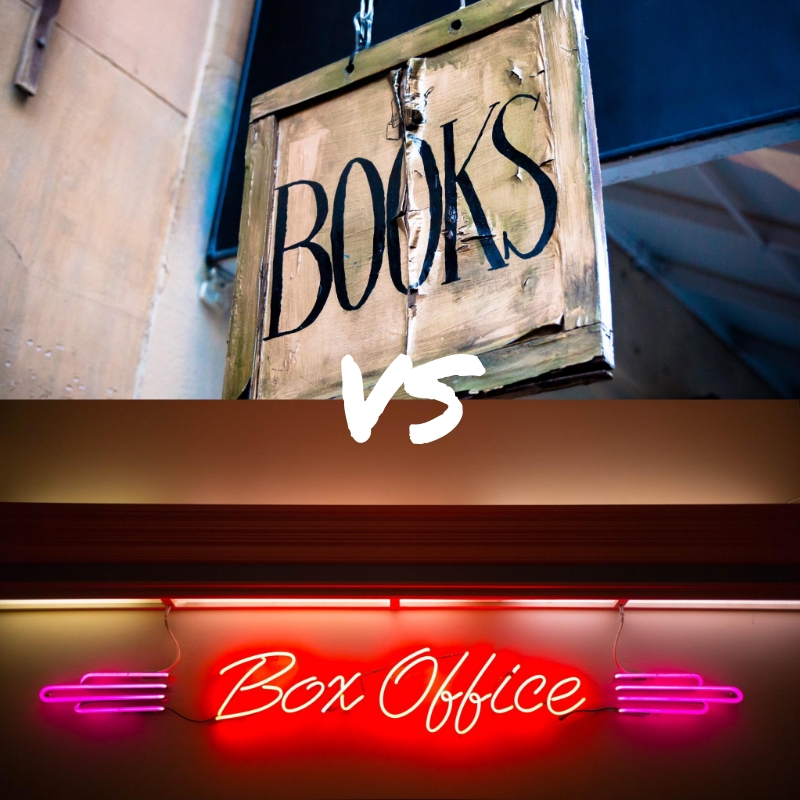 Brilliant Books and Their Movies That Weren’t So Marvellous

There are two types of reactions that bookworms have when they find out that a book they have read is becoming a movie. The first reaction is excitement, the idea that what you pictured in your head is coming to the big screen. The second reaction is the dread of yet another brilliant book being murdered by production companies.

We wanted to know just how many books that our wonderful users could think of where they have been turned into terrible movies. Here’s our top 7!

Cloud Atlas by David Michell is a Sci-fi hit! This book captures the reader’s imagination early on and keeps it even after they have finished reading, although the book is known to be confusing throughout due to the different timelines and characters.

“An interesting concept. numerous stories and time periods tell an interwoven story from the past to the distant future. Captivating in its unusualness but still mesmerising in its narrative.” –  Ruth Frampton The movie was less of a hit with a rating of only 6.5 out of 10. The movie had iconic actors such as Tom Hanks and Halle Berry, but still didn’t manage to be a Smash! The movie just didn’t hit the spot for many people. The first movie in the series may have been a box office number one, but this sequel didn’t even come close in many peoples eyes. The Light Between Oceans

This drama brought tears to many peoples eyes as they read. Most people tried to figure out what was right and wrong about the couples choices, but they were still left thinking about the situation. The book has more than 14 ratings and is currently rated 8.4 out of 10! What a Smash?!

“It’s a moving and thought-provoking tale of love, loss and morality. It really gets you questioning right and wrong.” – Sarah The movie really did disappoint a lot of the original readers. Users found that the book was cheesy and didn’t quite bring people to the same emotions that the book did. This spy thriller will have any reader biting their nails, but also rooting for our female protagonist, Dominika Egorova. The book keeps the reader guessing and that is what makes it so great. By adding in a little romance the plot mixes multiple genres making it intriguing.

“Jason Matthews’ Red Sparrow is sensual, thrilling, terrifying, and complex. Fast-paced and detailed, it is a plethora of action, politics, and romance. Set in beautiful and breathtaking locations all over the world with masterfully crafted protagonists and villains alike, it is unbelievably exciting and engrossing – a novel enticing to all of the senses!” – Peachy Bashan With the book having a rating of 8 out of 10 on Smashbomb we expected the movie to be just as good, yet the producers and directors of the movie just didn’t get it. The book had mixed reviews, but the bad outweighs the good. What did you think of Jennifer Lawrence performance of this Russian spy? Tweet us and let us know! This book messes with your mind throughout, you’re constantly trying to figure out what’s happening in Area X. Is it an alien or natural occurrence? From the beginning you’ll find yourself asking this question. Your imagination can run wild with this book, you can imagine what the area must look like, what the characters look like and feel and what horrors have occurred. Annihilation is the first book in the series by Jeff VanderMeer and the first of the series to be made into a movie.

“The first person narrative worked well with the story. The story was interesting and well paced.” – Erika The movie received mixed reviews from most people, but anyone that had read the book understood just how different the movie was. The movie wasn’t all bad, but just didn’t reach the expectations of the viewers that had Area X pictured in their minds. The movie bombed on Smashbomb with a meek rating of 6.7. The Hitchhiker’s Guide To the Galaxy

This is a book that everyone has heard about at some point, even if they haven’t read it. This is a sci-fi classic that has left its mark on the world, and has made many people laugh and ponder the wonders of the universe without it getting too deep.

“This is my favorite book of all time. I’ve read it 8 times & will probably read it many more times, before my time is due. The book is smart, witty & genius. The characters are funny, quirky & silly.” – Fred Now the movie was not what fans expected. This is the perfect example of movies that just didn’t do the books justice. How would you feel about them remaking this movie? Not all movies that are made from books are that bad, there have been many good movies that have been made based on the original book. Here’s a few that we have noticed;

To All The Boys I’ve Loved Before

When we found out that Netflix was making a movie based on this brilliant, we looked like children on Christmas Day! There was always a chance for things to go wrong, but that didn’t happen. The plot of the book was transferred to the movie and that was all we wanted, then Netflix threw in some amazing actors and great screenwriting to give us one of the best romance movies of the year.

“The movie was true to the quirkiness of the book. I will find pleasure in both re-reading the book series and re-watching the movie!” – Whitney K. Crowe

Yet another romance came from page to screen this year. Although the movie doesn’t follow the exact plot from the book, it still tells the same story. Now we thought that this could be a disaster, but Warner Bros. Pictures exceeded our expectations.

“I was really hyped for this movie and it didn’t disappoint. The visuals were amazing, the acting was great, the story, writing, and humour were all great.” – Jarom Solar Norris

It’s quite rare for a sci-fi book to become a good movie, but Ready Player One proved that it is possible to make a good sci-fi movie that is based on a book. When you read this book, you don’t need to know anything about gaming or the 80s to be pulled into the world and that was what Warner Bros. Pictures did with the movie.

“I loved the book on its own, and always will. The movie, though, was such a fun treat to watch! I wasn’t sure how it would go, but it definitely looked like a video game with all of the cool colours and graphics, and you can’t beat the music!” – AT

Tweet us and let us know which of these movies is your favourite!

More Books That Are Becoming Movies In The Year

Now, over the next year there will be more movies that fall into this list, but for now we can only hope for the best. Here are some books that are set to become movies in 2019;

Can you think of any more books that had movies that were just wrong? Tweet us with them!